Ebony and Simon share an unusual passion for young people…lawn bowls! It is becoming a more popular pasttime for the younger generation and it is very important to these two…

They met during a lawn bowls tournament.

Lawn bowls gave them the opportunity to keep meeting.

Simon proposed on the balcony of a lawn bowls club.

Simon works as a greenskeeper.

After stormy weather the day before Ebony and Simon were lucky to have a near perfect day! Simon looked handsome in his navy attire and, although a little nervous he enjoyed chatting with family and friends as he awaited the arrival of his bride.

The first to arrive were a very cute trio…little Allira was escorted  by her two older cousins as page boys.  They held tightly to a hand each which was probably a good idea as Allira had enjoyed exploring the vast gardens during the rehearsal .

Ebony looked stunning in her gorgeous gown as she arrived on the arm of her proud dad. The picture she made was enough to bring a tear to Simon’s eye.

Just as we started the ceremony a strong breeze began to blow Ebony’s veil all over the place. I put my hand out to brush it back and the whole lot came off in my hand. Thankfully Leah came to the rescue and a crisis was averted! Ebony just laughed…she was such a gem to work with!

The rest of the ceremony was less eventful, although Allira had to be coerced to take part in the Sand Ceremony. If the finished product is indeed a symbol this little family will never be separated as Allira gave it a really good shake and mixed the layers to create a unique blend. Room was also left for any future additions to this lovely family!

It was indeed, a magical day!

Sheena and Scott are one of the funniest couples I have had the pleasure to work with…absolute crack up! Sheena is an accomplished talker (code for never shuts up!) and Scott has a dry sense of humour that comes out at often inappropriate times. Together they are hilarious!

Their wedding was originally scheduled for Rosalind Park but the forecast of inclement weather combined with bats literally dropping from the trees (due to extended heat wave) there was a quick rethink of venue. Thankfully the Rifle Brigade Hotel were able to host the rehearsal and wedding on their beautiful balcony!

The rehearsal progressed smoothly until we got to the part where I move away out of the frame for the first kiss! What a kiss! As you can see Sheena is quite athletic and Scott quite strong! I have a feeling they may have done it before! 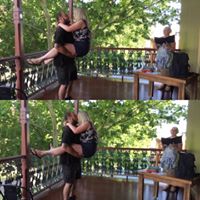 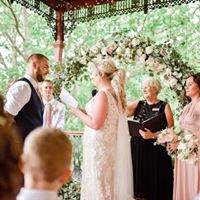 Waiting for the ceremony to begin I was chatting with Scott’s family. The love that flowed from his mum, Rosie, for her son was beautiful. She is so proud of the man he has become!

It was very humid and steamy on the balcony although a random breeze threatened to take off with my paperwork! Scott would insist that he was drinking vodka from his water glass! I probably could have done with something other than water myself!

Before long the bridal party arrived and the ceremony was underway! My husband/roadie, who was enjoying a beverage downstairs, told me that one of Sheena and Scott’s little boys handed him the sign he was carrying. If it was the one that said “I’m still single” …too late!

It was a very emotional ceremony! Both cried during the vows which were very personal and meaningful! Scott mentioned how he had fallen for Sheena physically and literally (he fell out of a tree) but it was obviously one of the best things that happened to him! Sheena made references to Doctor Who and how much she loved Scott and what real love looks like!

A sand ceremony followed that included both boys, as well as their mum and dad. It was a very special moment.

I wish Scott and Sheen all the happiness possible as their love story continues into their future together!

Since I had known Kasie and her family since Primary School it came as no surprise when our first meeting included her partner, Dean, two of their children and Kasie’s mum and dad.  It wasn’t hard to see that this ceremony needed  ideas to include as many family members as possible.

To start with Kasie and Dean included many family members in their wedding party. Kasie had her two sisters, Dean’s sister and their four daughter as bridesmaids, junior maids and flower girls. The groomsmen included Dean’s brother, Kasie’s brother , friends and young son and nephew as pageboys.  Kasie’s mum and Dad both walked her down the aisle to meet Dean. Both sets of parents were then called upon to welcome their children’s marriage partner to the family.

During the ceremony Kasie and Dean made a beautiful pledge to their children which promised to nurture them and care for them as long as they need them. The family was visually represented by creating a beautiful sand bottle  into which each family member poured a layer of  coloured sand. In doing so, they made something  new and beautiful but like any sand, difficult to separate…just like their family!

The ceremony concluded with a short reading by Kasie’s sister in law.

What a memorable day for all the family!

I first met Angelique and Drew after they spotted me on Facebook. We talked about their ideas and came up with some lovely inclusions for their ceremony. These  included  a traditional Celtic Hand fasting with a gorgeous reading  and an elemental blessing. For those who may not have heard of Hand Fasting it in the origin of the saying “tying the knot”. In olden times it was often used to signify the couples intentions . They would then live together as husband and wife until a clergy man could be found to complete the deed. Today it adds a beautiful element of difference. It is  a moment to treasure in the words that are said and the symbolism of “binding together in marriage.” I also used the knotted cord to bind and decorate the ceremony book after the wedding!

As Drew was waiting for Angelique to arrive I asked him to turn his back. Angelique wanted him to turn and see her when she was at the arbor. I couldn’t help but smile as I witnessed Angelique’s uncle serenading her as she stood waiting for her cue to proceed down the aisle.  He sang to her all the way as he escorted her to Drew’s side! Such a delight!

Angelique and Drew had provided lots of information about their relationship which entertained some of the guests. It allowed Drew and Angelique a few moments to relax and breathe.

The ceremony went off without a hitch! (pun intended) and our couple were  overjoyed to become husband and wife! Afterwards the lovely Christine (Christine Treacy Photography ) and I conspired to ask the guests to stand and blow bubbles as our couple proceeded back down the aisle to be greeted and congratulated! What a wonderful ending to a beautiful ceremony!

I
listen carefully and do what people want!

You
have a particular idea in mind…I help you to implement it!

You
don’t know what you want…I offer suggestions and guide you!

You
get as much or as little help as you need with things like writing your vows,
adding readings and inclusions …things that make your ceremony special!

You
can have ANY style, Any venue and I will help you make it work.

The
one thing I won’t do is pressure you to have anything you don’t want!! That’s
not me!